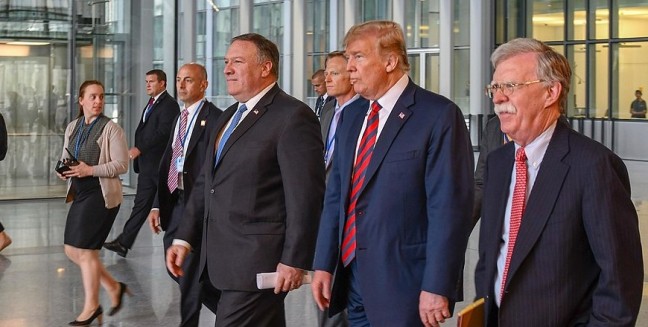 Bolton left the Trump administration last week. The NSA’s departure has been welcomed by most as his hawkish stance was the source of diplomatic strife in major international conflicts. Yet, his past experience in Western Sahara and his natural impatience were starting to shake things up there, after fourty years of conflict. His departure reduces once again the chance of a resolution between Morocco and the Sahrawis.

On 10. September President Trump announced in a Tweet the resignation of John Bolton, his third National Security Adviser (NSA) since his election. The ground for Bolton’s resignation/firing (this remains unclear) seems to be have been an opposition of views within this administration. In the past few months, Bolton had refused to stand behind some of Trump’s most crucial stance on foreign issues, particularly Russia, and criticized the announced withdrawal of American troops from Afghanistan.

Bolton was a controversial figure. He has been qualified by American and international press as a “Hawk”, and even a “uber-hawk” due to his inclination to mobilize the troops to solve crises and his hard-line unilateralist stance. The departure of Bolton has been received in mixed ways, some, like Bernie Sanders, arguing that “A symptom of the problem is gone”,  others regretting this event for that he was the last rail guard preventing the American president from making potentially disastrous foreign policy decisions.

While the cases of Iran, Afghanistan, Venezuela, Russia and North Korea remain sensitive cases for which the presence of Bolton had caused diplomatic issues, there is one conflict that Bolton could have had a lasting and positive influence on: Western Sahara.

Overview of the Conflict

Western Sahara has been imbued with a lasting conflict since the departure of the Spanish settler in 1975. The territory has since been the object of contention between the Moroccan forces who claimed the territory for themselves and who now control 85% of the territory, and the Polisario Front, the Saharawi forces who demand to exert their right to self-determination. The conflict started with violent affronts until the intervention of the United Nations (UN) in 1991. The organization set up the United Nations Mission for the Referendum in Western Sahara (MINURSO), whose mission was to impose a ceasefire and “organise and ensure a free and fair referendum and proclaim the results.”

Western Sahara remains a non-self-governing territory, Sahrawi refugees still live in refugee camps and the parties still seem unable to find a way out. There was, however, hope that things would get a move in the last two years. First, the last Personal Envoy, Horst Köhler, who was known for his strong handling of international affairs, had managed to gather the parties in December 2018 and March 2019, a first in more than five years. He, unfortunately, had to resign from his  position at the UN last May due to health issues. The second person was John Bolton, Trump’s NSA.

Bolton would probably have been able to guide Trump’s on the matter – after all, Western Sahara is not as crucial of a case as negotiating with the Taliban, Putin or Kim Jung-un.  This would have given Bolton more leeway to act more freely.

Bolton could have indeed made a difference thanks to his personal commitment to the case. He had been involved in the peace process, working pro bono for James Baker III, the first Personal Envoy, between 1997 and 2000. He followed up on the issue as US ambassador to the UN for a few months in 2006. He also visited the refugee camps. Overall, his presence in the Trump administration seems to have intensified the momentum around the conflict. The NSA’s involvement has even been nicknamed “The Bolton effect.”

His stance on the matter has been clear throughout: MINURSO should be ended if nothing comes of it. This is the stance he supported in 2006 and yet again since his appointment in Trump’s administration. It should be noted that Bolton is at the origin of the UN Security Council’s unconventionally short mandate renewal (from a year to six months) of MINURSO which started in 2018 (Resolution 2414). While this aimed to put an end to an ineffective UN mission, in line with Trump’s dismissal of international organizations, this strategy aimed at putting more pressure on the parties. This highly contributed to Köhler’s ability to gather the parties twice within a few months.

The reason for the lack of resolution is first and foremost a contentment with the status quo, especially on the part of France, and to a certain extent the United States. After all, Western Sahara is a frozen conflict, and no one has died since 1991. But this acceptance with things as they are is responsible for the stalemate – the reasons to address the issue are just not pressing enough compared to other crises. If one wants to see this case closed, international actors would have to get fed up with the conflict. And this is exactly what Bolton brought to the table – impatience and frustration with a conflict which has now been monitored by the UN for 29 years.

Bolton’s position somewhat diverged from the US’s traditional position, centred around supporting the UN’s endeavours while favouring not particular solution. However, in doing so, Washington indirectly backed Morocco’s intransigence and the stagnation of the conflict. Bolton, however, criticized Rabat’s behaviour, and accused it of delaying negotiations to get out of finding a solution, and went as far as rejecting Morocco’s autonomy plan for the region. With Bolton, the Polisario Front found a supporter within the Trump administration. Indeed, the former NSA preferred the option of a referendum, the Polisario’s preferred outcome, which was mostly set aside in recent years, thus continuing the work of Baker. It is worth noting that Baker’s plans would most likely have worked if it had not been for Morocco’s strong opposition.

Morocco seemed to believe that nothing had changed with Bolton, and that the pressure was ineffective because the US government was too close to the Moroccan monarchy, relying on them for the stability of Maghreb. While it is true that the former NSA would not have been able to force Morocco into doing anything that the country refused, especially if Trump opposed his course of action, Bolton helped create a sense of urgency, and more generally, to put the conflict over Western Sahara back on the table.

As Antonio Guterres, the UN Secretary-General, is seeking a new Personal Envoy, and Trump a new NSA, let’s hope that the two new officeholders share a commitment to solving the conflict through a genuine “mutually acceptable political solution that would provide for the self‑determination of the people of Western Sahara.”